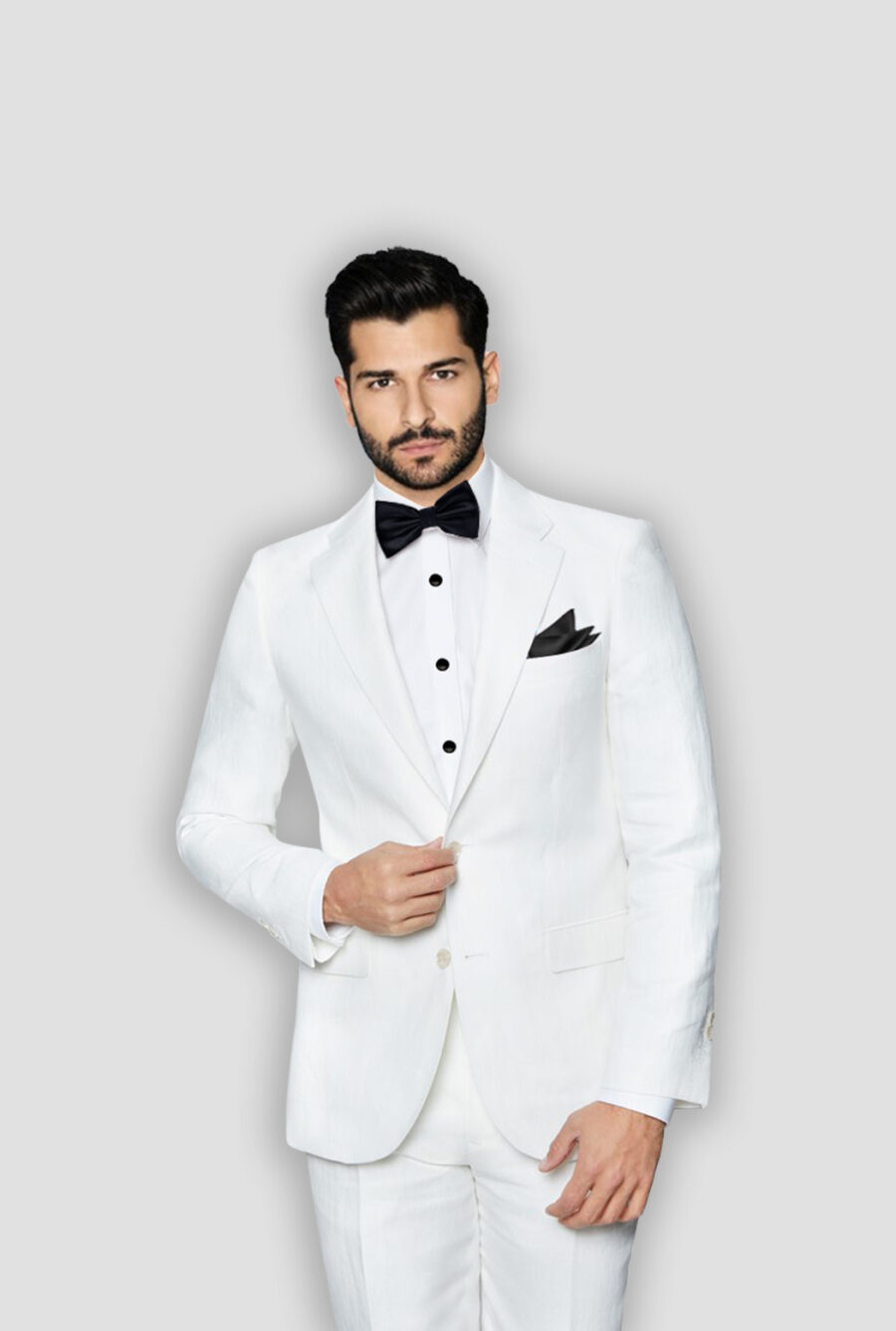 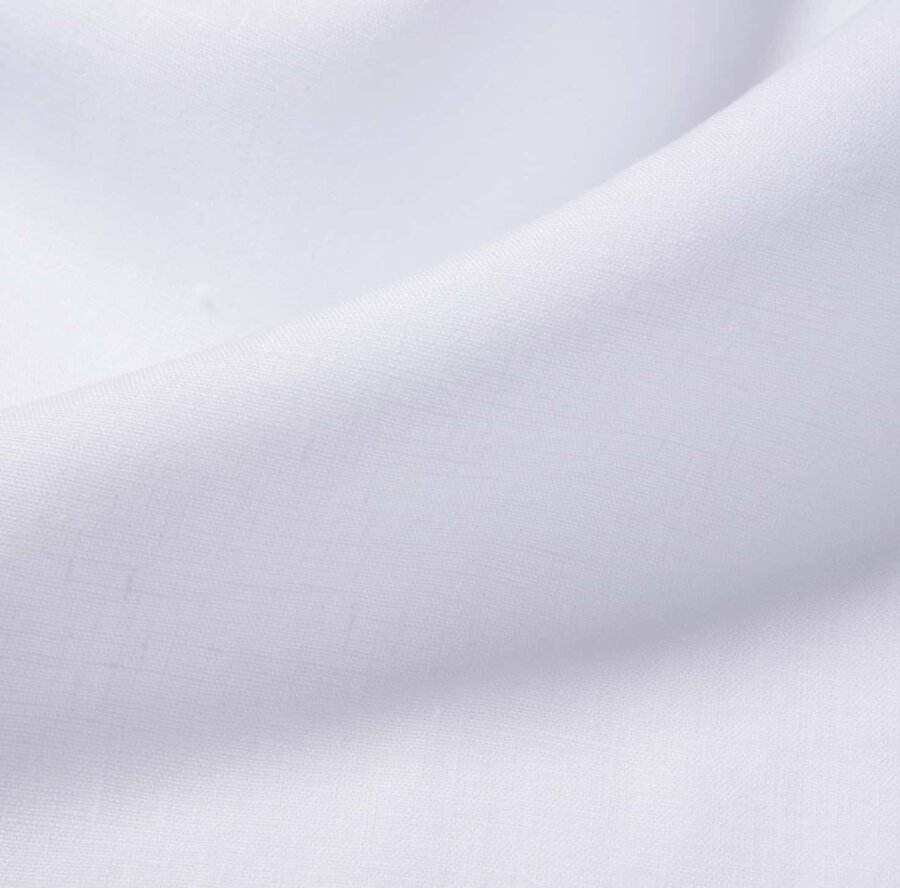 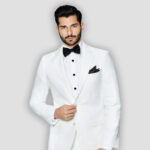 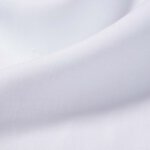 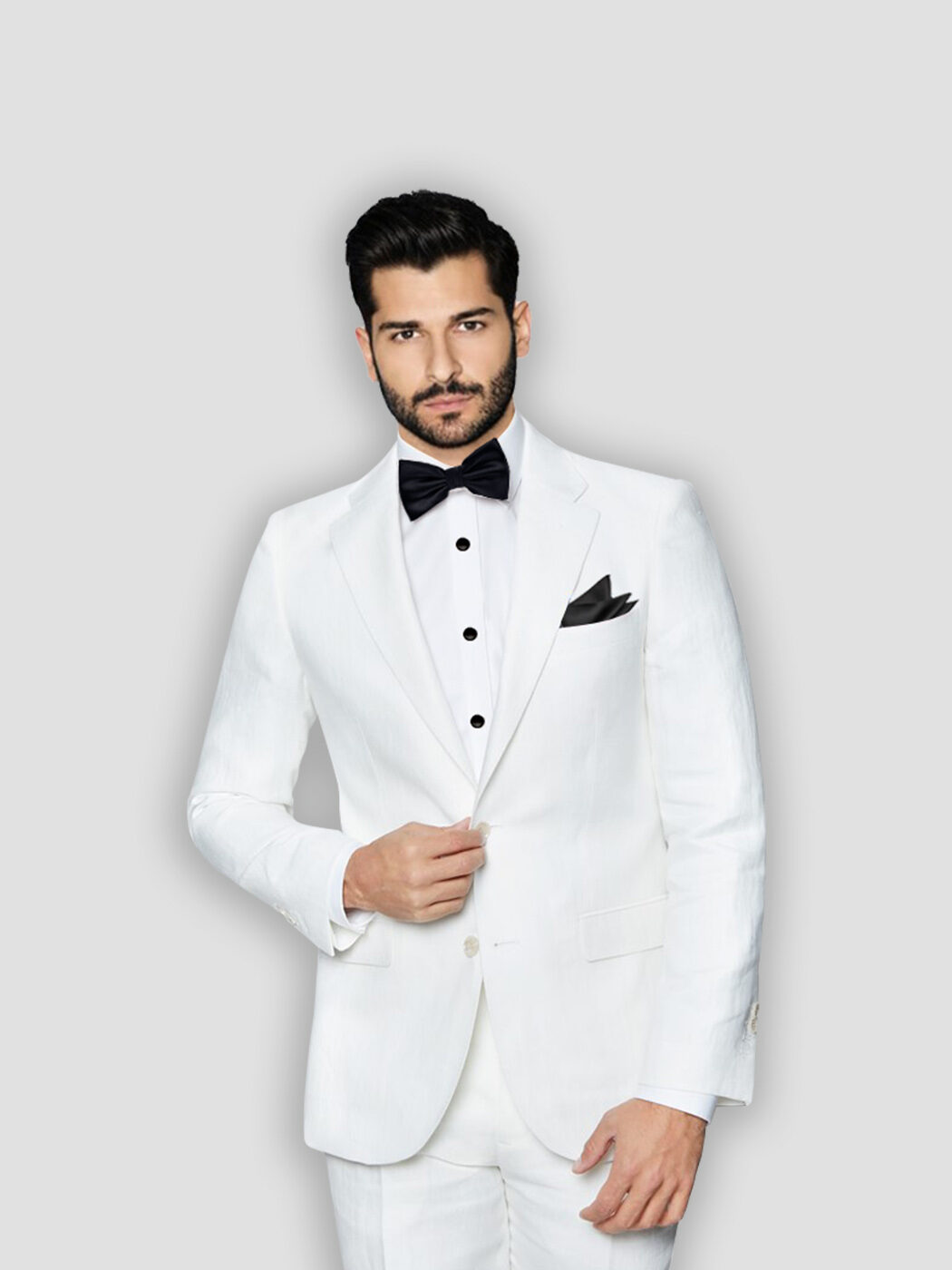 Mens Linen Suit a lightweight white suit perfect for the heat of summer. Cut from 100% Irish linen woven at the renowned Baird McNut factory in Northern Ireland, this suit features unique breathability and linen drapes for a luxurious silky feel.

This classic white is the epitome of a fresh, laid-back summer suit, beautifully showing the subtle variations of the slightly irregular weave.  Mens Suit

John Hanna built the Shank Bridge Mill in 1798. This mill stood out from the many other linen mills in the area. John Hanna realized that it would take a combination of his knowledge of chemistry and the new technology of engineering to turn woven linen into a great fabric.

Our factory is located on the edge of the ancient Antrim twin villages of Kells and Connor in Northern Ireland, where numerous wool and linen mills lined the banks of the River Kellswater during the Industrial Revolution of the late 18th and early 19th centuries.

The Baird family business was established in 1912. The factory was equipped with 400 Atherton looms, which were used in the cotton industry.

The factory mainly produced fabrics for handkerchiefs.
It mainly produced handkerchiefs for the largest market at the time, the U.S. It was under the leadership of William James Burgoyne Baird that the company acquired John Hannah’s Shankbridge dyeing and finishing plant in 1991.

What makes it special for summer

100% linen made of natural fibers
Linen, made of 100% natural fibers, is the material of summer.
Fine linen is durable, strong, and comfortable, and the properties of this fabric make it the star of summer. The fibers won’t stretch, resist damage from rubbing and washing, and the colors won’t fade. Linen absorbs moisture well and releases it quickly, and it dries quickly so it doesn’t stick to the body. Air passes easily through the linen fibers, allowing the skin to breathe easily.

Why choose a linen suit (even if it wrinkles)

In the summer, most men’s suits are too hot to wear because of their fibers and weight. That’s where linen suits come in, perfect for any occasion. They’ll save your summer wardrobe and keep you cool all season long.

Why don’t you mind if it wrinkles? Mens Linen Suit | Men white linen suit | White linen suit mens
But linen, more than any other fabric, loves to wrinkle and crease. Being a natural material, linen looks best when it’s properly wrinkled. If you wear it in the morning, properly pressed, it can look formal and sophisticated, but a little stiff. During your day, and especially when you travel, you will see some creases appear on your clothes.

This is a good thing because it can create a relaxed atmosphere. Linen has a very luxurious feel to it, with just a hint of a slightly worn and worn look. No one will notice the creases when it’s 100 degrees outside, but everyone will notice that you don’t mind the heat in a linen dress.

How to avoid excessive wrinkles in linen clothes (innovations)
If you want to visibly reduce wrinkles, there are two solutions: first, always hang your jacket when you’re not wearing it, and second, choose a linen blend. Good linen can take you effortlessly from business trips to summer weddings. Here are some tips to help you do just that.

A tailored linen dress with custom details is the perfect choice for a summer wedding.

Which to choose. Mens Linen Suit | Men white linen suit | White linen suit mens
Choose from colors like tan, dark beige, tobacco, or cream/off-white that are perfect for a casual outdoor or indoor summer wedding. Linen jumpsuits are usually worn as a two-piece for a more casual beach style wedding dress, especially if you are attending as a guest.

However, a well-cut three-piece suit can be a smart way to beat the heat. For the groom, a three-piece suit for a country wedding, with a vest in the same tone as the suit, will give a smart, casual look without compromising the formality of the wedding.

If your wedding will be held in a formal summer setting, a dark blue or gray linen suit is a good choice. We recommend a dress made of 100% linen or a cotton or wool and linen blend. We recommend mixed fabrics for formal ceremonies in warm weather, as they are less likely to wrinkle than 100% linen suits.

For the best man, it is advisable to dress in accordance with the groom. If the groom is wearing a three-piece linen suit, the same rules should apply to the groomsmen and best man. The color should be slightly different from that of the groom’s suit, and should be a lighter shade. Mens Linen Suit | Men white linen suit | White linen suit mens

Wedding guests can choose a two-piece or three-piece linen suit, depending on the size of the wedding. A beige or sand linen suit will keep the atmosphere formal for an evening or night wedding, but for a casual, conceptual wedding, lighter colors are preferable. For daytime weddings, light colors such as beige, cream, light blue, and white are perfect. Mens Linen Suit | Men white linen suit | White linen suit mens