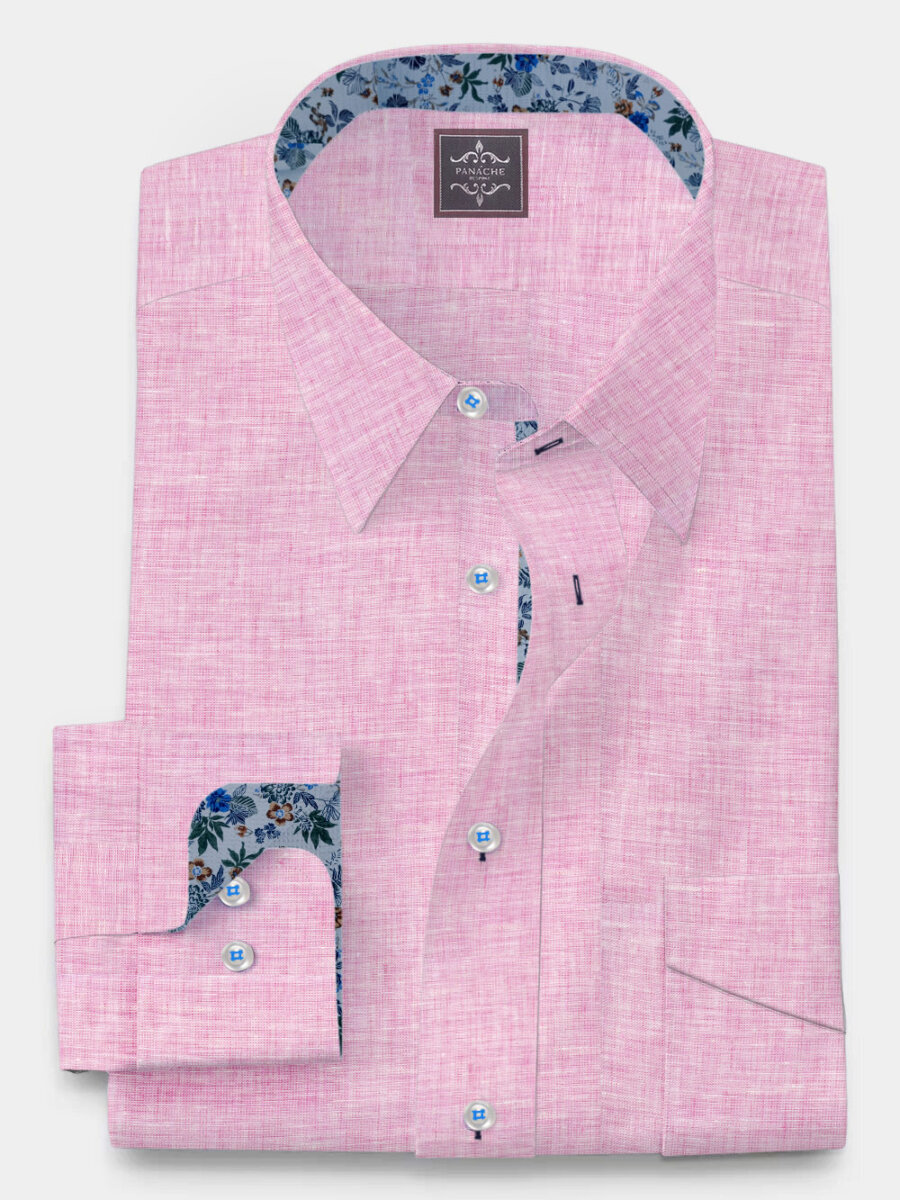 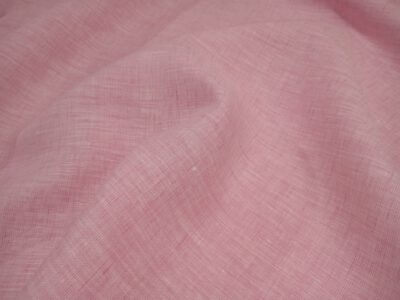 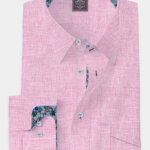 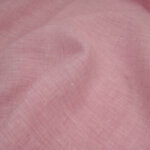 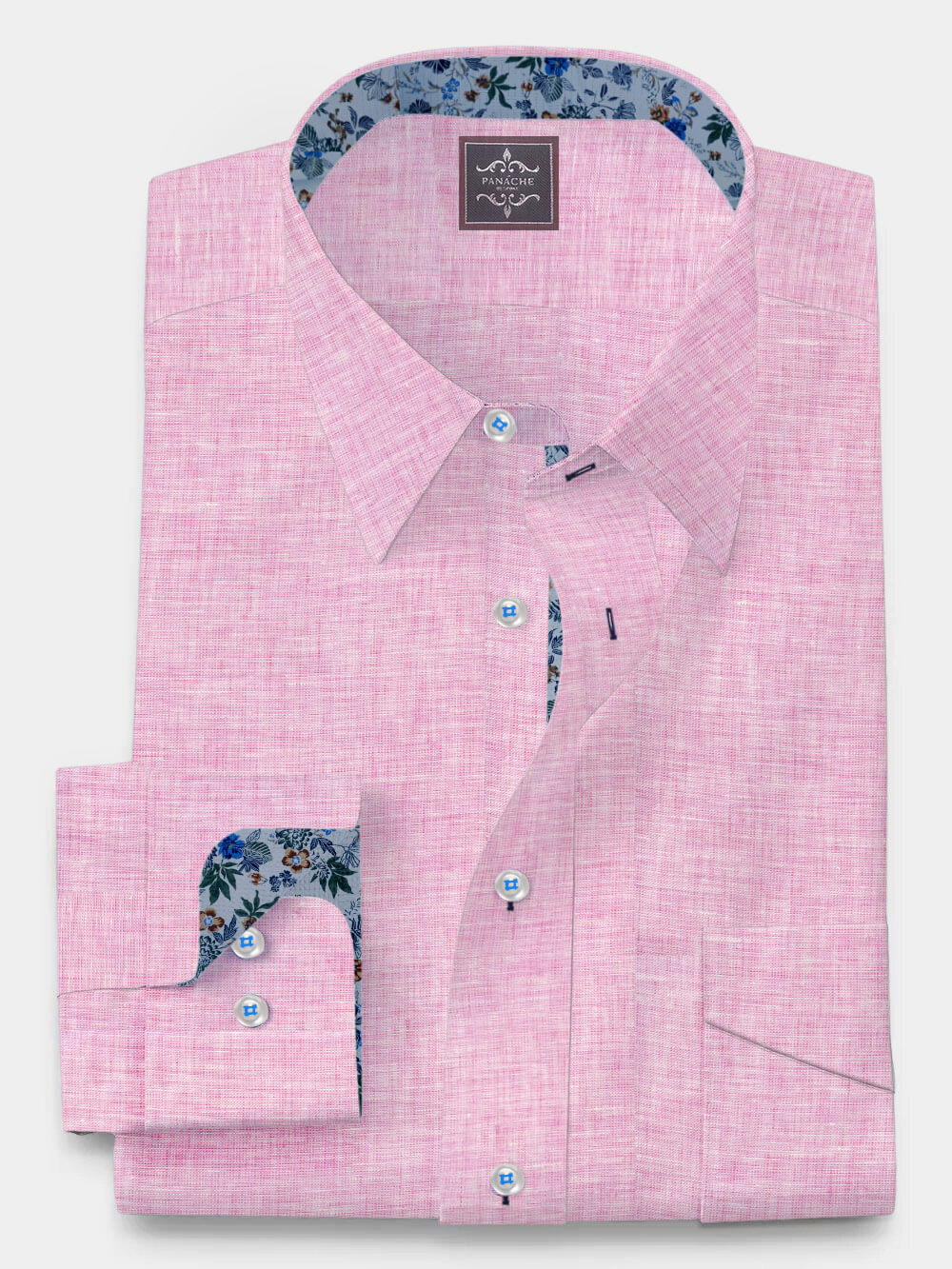 Faded Rose Linen Shirt | Mens Linen shirts | Linen shirts men. Beautifully colored and luxuriously soft Faded Rose Linen shirt fabric. A 100% vibrant linen fabric is woven in Irland.
Linen has an airy and weave that breathes incredibly well.   Linen shirts
It is naturally cool to the touch and really absorbent, making it an important summer if it’s one. Linen fabric rose color. In addition to the beige color, this fabric is also available in 97 other colors. linen is a vibrant fabric.
Linen use in casual or fashionable men’s clothing. Faded Rose Linen Shirt | Mens Linen shirts | Linen shirts men
Linen also features a fluffy natural texture that provides it character and makes it visually interesting whether it’s solid or patterned.
Although it’s naturally more subject to wrinkles, it’s a part of the charm and attractiveness of linen.
Our linen shirts will soften and improve as they’re washed and worn, so you’ll enjoy them season after season.

How to Wear A Linen Shirt

Not only is it the time of year when the weather turns nice, once you can tan during a t-shirt or attend add shorts, it’s also the peak season for linen, a natural fiber.

Linen may be a breathable material, soft, naturally wrinkled, and light, making it a perfect layer for spring and summer styling.

The classic combination of linen shirt shorts. Not just any shorts, but fitted shorts cut above the knee to offer you a pointy look.

There are many things to think about when choosing a linen shirt, like the collar style, color, and pattern. the foremost important factor, however, is that the fit.

A button-up linen shirt should be airy, but never baggy. like all good evening shirts, the cuffs shouldn’t stick out from the wrists and therefore the shirt shouldn’t look loose.

Otherwise, you’ll appear as if the daddy of seven children. Contrasting color combinations are recommended, like a white linen shirt and pastel-colored shorts, or a blue linen shirt and navy shorts.

Jeans accompany almost anything, and therefore the same goes for linen shirts. Pair a pair of slim or skinny fit jeans with a long-sleeved linen button-up and you will appear as if a weekend warrior.

Black or indigo denim also will work, as long because the contrast works.

Roll up the sleeves to below the elbow and wear casual shoes (lace-ups or white sneakers are best) for a good more stylish look. It’s simple, stylish, and definitely summer-friendly.

Bringing linen into the realm of smart casual is that the combination with chinos. If you are looking for a very stylish summer aesthetic, this is often the design for you.

It is easy to wear, insanely cool, and versatile enough to be layer, and made even more stylish.

Light-colored chinos like khaki, cream, sand, and pastel colors go well with linen shirts. Linen shirts are often worn with sleeves rolled up or down.

Again, color contrast is vital, and men don’t get to worry an excessive amount about the unironed look of linen shirts.

Since linen shirts accompany most sorts of jackets (except tuxedo jackets), the sole rule that has got to be follow here is whether or not the linen shirt is tucked or not.

In casual situations, linen shirts are often worn untuck, but it’s best to avoid linen shirts that are too long. If it is, you’ll be wearing the incorrect size shirt and wish to size down.

Did you ever think that linen is merely for laid-back men like cruisers? But once you enter a more sophisticated realm, linen shirts shine when paired with perfectly tailored pants.

the essential rule is to wear the sleeves down, but in casual workplaces or when it gets hot, you’ll roll them up. Also, the rule of thumb is to tuck away your shirt.

A bit like dress shirts in formal situations, linen shirts got to be tuck into your pants.

Don’t be concern if your boss tells you that you simply look wrinkled, just say “that’s just the way it is” before you drink your coffee.

As mentioned earlier, the key’s the color contrast between the pants and shirt and shoes or loafers without socks. Faded Rose Linen Shirt | Mens Linen shirts | Linen shirts men

Pairing a Linen Shirt with a Suit

Finally, let’s take a glance at the mixture with a suit. this is often not the linen suit we saw earlier, but a linen shirt is worn under a suit.

As you’ll see, albeit it’s an equivalent color because the pants, the linen shirt features a contrasting texture. this is often difficult to realize but absolutely possible with a suit.

Just remember to tuck the shirt in and keep it slim. As for the mixture of blouse and suit, consider it an equivalent way you’d match an evening shirt to a suit.

It’s fine if either the shirt or the suit may be a subdued color, but not both. for instance, a navy suit with a white linen shirt, or a gray suit with a navy linen shirt.