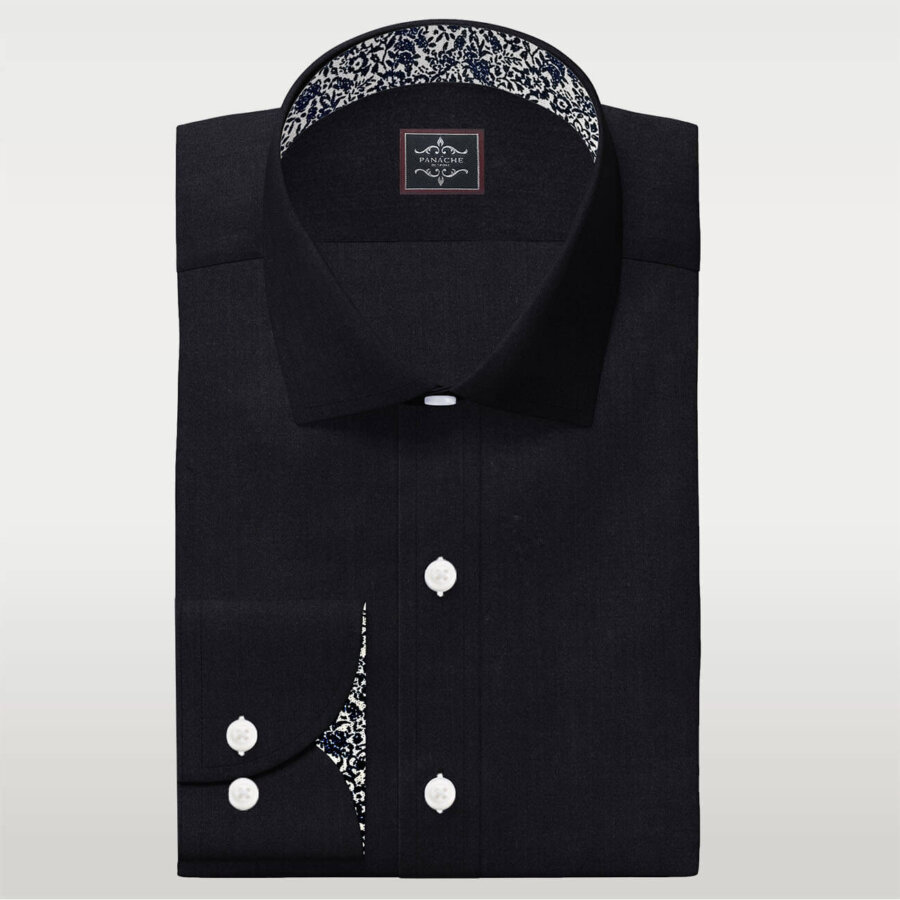 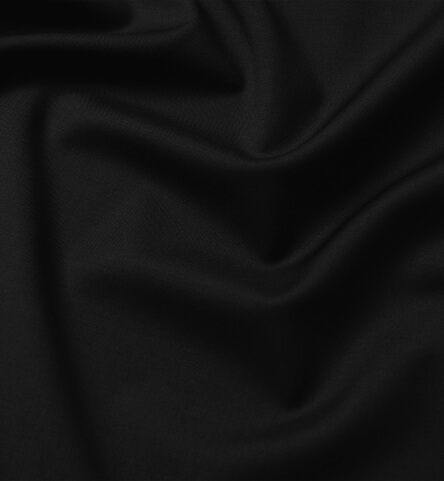 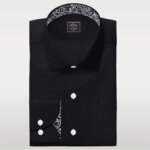 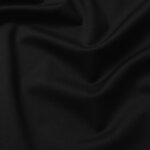 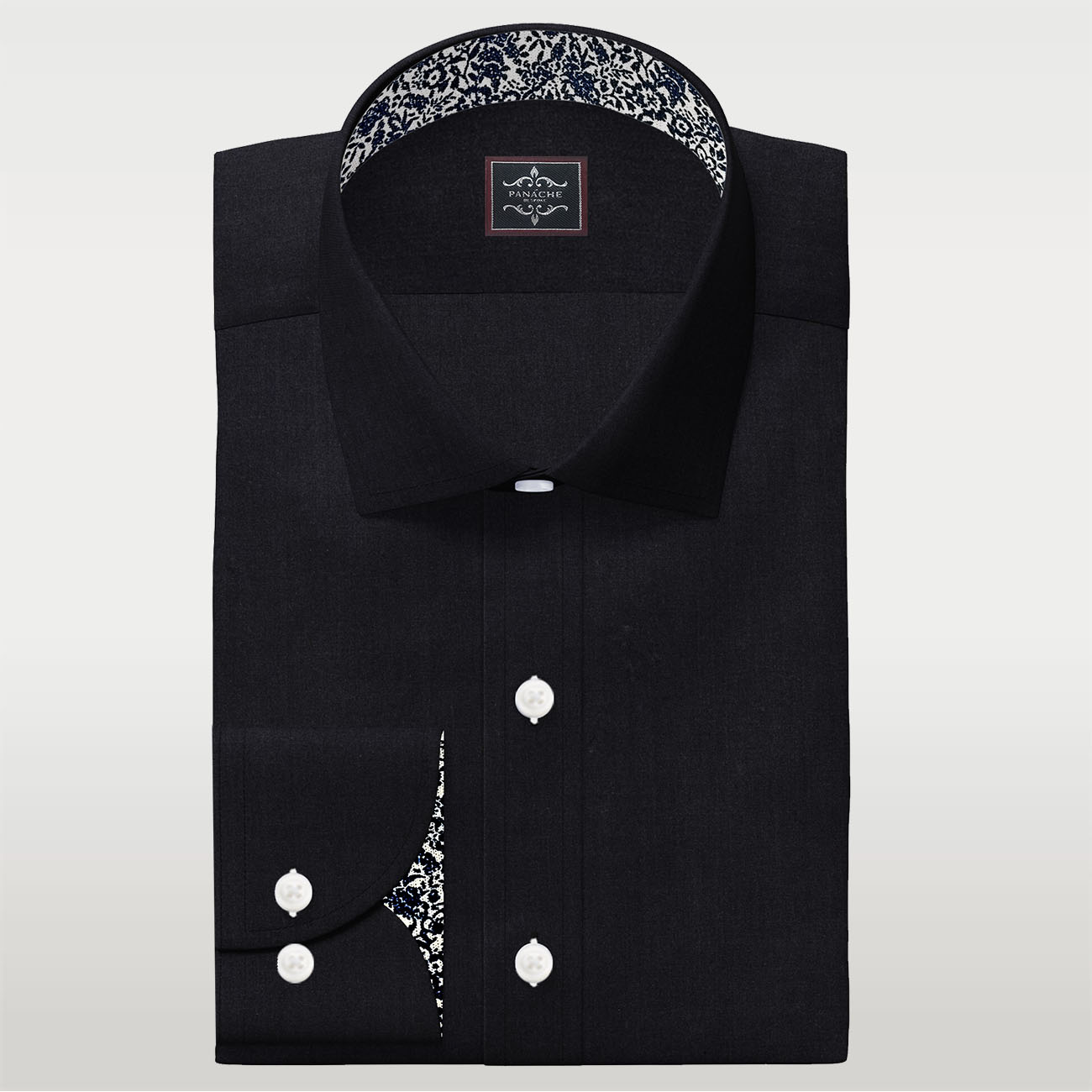 with almost no texture and a tight weave pattern on the Black Men’s Dress Shirt for a smooth feel.

Therefore, this poplin is perfect for a casual Men’s Dress shirts brunch in all-season or outdoors. Mens Dress Shirts

Light and silky. Specially woven using a 100’s warp and weft construction, it is more durable over time than the smoothest and light fabrics of this style.

This way we love this because of its sleek look. This is a simple and elegant weave with no texture. Men’s Dress Shirts

This specially developed Miles Broadcloth provides the right balance between a luxurious feel and incredible performance.

It uses a 2-ply 100’s construction for the warp and weft, so it lasts longer than most light and smooth fabrics in this style.

We have confirmed that it is a thread-dyed fabric rather than a partially dyed fabric-a subtle difference, but more difficult, black can retain its color better over time. I can do it.

As a result, there is less discoloration than the partially dyed counterpart. Black Men’s Dress Shirt Light and smooth.

Hang to dry on a hanger.

This is a question that was asked, “What one thing do you think is missing from a basic shirt?
A black shirt.

Blackshirts always look great on me and I think they have a little more “sex appeal” than light-colored shirts.

I think it’s more “sexy” than a light-colored shirt. I see you hit on a good point. Because black is symbolic. In other words, colors have symbols.

Brown is a color that symbolizes trust, and it is a very earthy color. White symbolizes cleanliness, and there is a reason why doctors wear white jackets.

So, what do we think of when we see black? Certain things come to mind.
And a little sexy to the right person, yes, I know that.

So let’s talk about black shirts. I will tell you how you should wear it. The first rule when wearing a black shirt is to have the right complexion for it.

However, only men with dark hair and medium to dark-colored skin can wear the shirt. In the second part of this article.

I will talk about other men who wear black shirts and what they wear them for, even though black shirts do not compliment them the best.

But a man with dark hair and dark skin can wear black.

It is men with dark hair and dark skin who can wear the color black the best.

The reason is that black does not overwhelm his natural color because the contrast is not so obvious.

It doesn’t overwhelm his natural color. I also have dark brown hair. Actually, I haven’t been in the sun much.

Spring has just begun here in Wisconsin, and even though I am well-tanned, I will say this. The color black is.

I can wear it well, but if I had dark hair and the same color skin.

If I had dark hair and the same color skin, I would be able to kill it because it would mimic the color of my hair and shirt.

Because in a way, you are framing your face appropriately by mimicking my hair and shirt color.

The purpose of clothing is to wear clothes that have color, especially here. You want to frame your face.

This is because you want people to pay attention to it when they communicate with you.

Yes, you can, if you want to isolate your face. A famous example is Steve Jobs’ black turtleneck. Think about it.
He is standing on a big stage.

You are zooming in on him and he doesn’t want to focus on anything but his own face.

The look on his face when he is selling a product when he is making a point when he is trying to inspire. That’s one of the reasons.

That’s one of the reasons. We often see men with bright faces trying to wear black shirts or dark-colored clothes.

I often see men trying to wear dark-colored shirts, especially against a dark background, and the whole thing looks “thumpy”.

Especially with a dark background, you suddenly have to focus on the face. Another good example is if you’ve ever been to the Blue Man Show in Las Vegas.

As an artist or anyone who works with light knows, black sucks in and absorbs light. Black absorbs all light and does not reflect it.

It will also be less formal than a white or light-colored dress shirt. Therefore, if you are going to wear it with a suit or sports jacket.

It will always be less formal than a light-colored jacket, even if it is plain.

If you wear it without a collar, it can be quite presentable, especially if it is plain black. Especially if it’s all black. I’ve done this.

I think that no matter what type of jacket you wear, you need contrast. Or wear something black. Some people like the all-black look, and one person wore it beautifully.

Look at vintage photos and Johnny Cash up until his untimely death. He’s a man in black.

He is a great example of a man who pulled this off. Again, he was going for the look… I mean, here’s a guy who played at Folsom Prison.

And he was Actually, I don’t remember exactly where he played. I do know that he played at Folsom Prison. I’m not trying to fool you guys.

I don’t know exactly which prison we played at, but it was. This guy. He’s the kind of guy who goes to prison, plays for some pretty rough people, and has a good time.

I think he was talking about how in Nashville a lot of people were wearing bright colors back then.

He’s trying to create a bit of mystery, and he’s done a great job of it.
But I think this is too much.

I’m not sure they really knew what signal they were trying to send. Be careful with the all-black look.